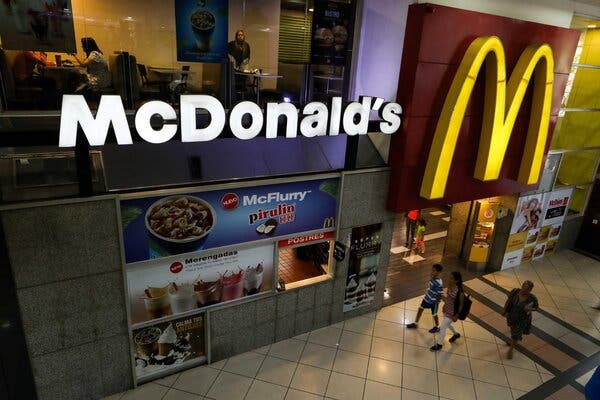 A veteran board member is out

McDonald’s, the world’s largest restaurant chain, today is announcing a major shake-up of its board of directors as the company faces inflation, war in Europe and tensions with franchisees. Sheila Penrose will retire after more than 15 years, and three new executives will join: Anthony Capuano of Marriott International, Jennifer Taubert of Johnson & Johnson and Amy Weaver of Salesforce.

Penrose’s departure is likely to raise questions on Wall Street about the failed efforts championed by the billionaire Carl Icahn to oust her and another director from the chain’s board this spring. A McDonald’s spokeswoman told DealBook that Penrose’s departure was unrelated.

Recapping the Icahn battle. Icahn earlier this year launched a campaign to change how McDonald’s sources pork, pushing for the ouster of Penrose, who chaired sustainability, and Richard Lenny, the former C.E.O. of Hershey. McDonald’s won the contest resoundingly; Icahn garnered only 1 percent of votes. And Penrose won the backing of about 95 percent of voting shareholders. McDonald’s chairman, Enrique Hernandez Jr., lauded her tenure, saying she had overseen the chain’s “critical progress” on its “climate, responsible sourcing and diversity, equity and inclusion goals.” McDonald’s has not yet picked her replacement as sustainability lead.

Catching up with the Big Mac. The chain reported same-store sales growth last month that topped analysts’ expectations. But C.E.O. Chris Kempczinski warned Wall Street that inflation, rising interest rates and the war in Ukraine were “contributing to weak consumer sentiment around the world and the possibility of a global recession.” Shareholders of the chain, which has battled discontent among certain franchisees, in May supported the company conducting an audit of its D.E.I. efforts, as well as other diversity matters.

Where its board stands. Last year, certain shareholders voted against two board members, including Hernandez, over the handling of the 2019 dismissal of C.E.O. Steve Easterbrook; all members were ultimately re-elected. The new directors have experience in areas the chain is looking to bulk up in: Taubert, who is worldwide chairman of pharmaceuticals at J&J, brings a focus on global health care, with McDonald’s under pressure to serve healthier products; Capuano, Marriott’s C.E.O., has ample franchisee and hospitality experience; and Weaver, Salesforce’s C.F.O. adds digital acumen, as McDonald’s focuses on its online loyalty program.

Walmart expands abortion coverage for employees. The nation’s largest retailer said its health care plans will pay for abortions in a greater number of circumstances, as well as travel expenses. It’s the latest example of corporate giants continuing to adapt to the shifting legal landscape for abortion rights.

Tesla raises the price of Full Self-Driving, again. Elon Musk tweeted last night that the electric carmaker’s software would cost $15,000 starting next month, up 25 percent. It’s the second price increase this year for the feature, which is under scrutiny from federal and state regulators following accidents involving the driving mode.

European natural gas prices surge on Russian supply fears. Natural gas futures contracts rose as much as 16 percent after Moscow said it would shut the Nord Stream pipeline for three days later this month, for what it said were repairs. The news set off new doubts that Germany, Europe’s biggest customer of Russian gas, would have enough energy supplies for the winter.

Meme-stock mayhem returned with a vengeance last week. But don’t confuse this bout of frenzied trading with the phenomenon that jolted the markets a year ago.

One big change: unsophisticated meme-stock pickers are increasingly turning to highly speculative options trading, alarming some market watchers. A year ago, a bored stay-at-home trader might have cashed in, or “YOLO-ed,” his stimulus checks to buy cryptocurrencies or shares in a buzzy SPAC or stock like GameStop.

“Now, a lot of them play with options. It’s like a lottery ticket to them, even if they don’t exactly know how the options market works.” Arnaud Vagner, the founder of Iceberg Research, an activist short-seller firm, told DealBook. Breakout Point, which follows social media buzz around stocks, is also tracking more options-trading chatter among meme traders, and sees overall chatter around meme stocks as far below last year’s volumes.

Options trading is considered risky because you can lose money you don’t have, should a bet turn sour. Even so, it’s become popular method among traders who try to ride meme stocks. Robinhood, for example, offers customers commission-free options trading. The trading app warns, however, that it “entails significant risk and is not appropriate for all customers.” Robinhood says it screens individual accounts before granting options-trading capabilities.

Concerned about unsophisticated day traders, Arnaud said he’d like to see increased regulatory oversight in this corner of the market. The S.E.C. has cracked down on individual traders using options contracts to dupe other meme-stock investors, but has yet to make any larger changes to the trading rules.

“I am an American. I do believe that these organizations have a duty to try and bring the country together a little bit, instead of trying to exploit differences endlessly.”

A Supreme Court battle “every business should watch”

After a transformative term full of contentious decisions, the Supreme Court is on break. But government lawyers are already working on the next potential bombshell issue that could redefine the powers of Washington’s chief regulatory bodies. It boils down to two cases involving the F.T.C. and S.E.C., which will be considered together. The cases revolve around whether people and companies can fight the government in court while administrators fight them, or if they must wait until administrative proceedings end to claim constitutional violations.

If the challenges are approved, enforcement agencies may face an onslaught of lawsuits challenging their authority. Some could ultimately lead to the Supreme Court. “Every business should be watching,” a former F.T.C. chairman, Jon Leibowitz, told DealBook.

Why are we watching this case? The F.T.C. challenged a 2018 merger between the body-camera developer Axon Enterprise and Vievu, an ailing competitor. In 2020, Axon sued on constitutional grounds after the F.T.C. initiated proceedings. The Ninth Circuit Court of Appeals in California found Axon could not fight the F.T.C. while its process was ongoing. But the Fifth Circuit Court of Appeals in Louisiana went in the other direction. It allowed a lawsuit by Michelle Cochran, an accountant facing a 2016 S.E.C. proceeding.

Oral arguments, set for November, will examine whether Congress wanted the district courts to be able to decide constitutional challenges to a commission’s “structure, procedures and existence” while the administrative process is still underway.

Axon’s C.E.O. said the company was suing to defend businesses that can’t afford to fight. “Facing the abuse of the administrative state, my company decided to sue,” the C.E.O., Rick Smith, wrote in The Wall Street Journal in 2020. He argued that the F.T.C. was not an impartial arbiter because it acted as prosecutor, judge and jury, and that delaying constitutional challenges until after it decides a case only compound the injustice. In an amicus brief, filed in May, the U.S. Chamber of Commerce decried the “costly” and “existential threat” businesses face by such “unconstitutionally structured proceedings.”

The government’s counterargument: chaos in the courts. In an August brief, the solicitor general warned that a win for Axon could wreak havoc on the legal system and incentivize a flurry of lawsuits to thwart the government. But Axon’s complaints about a meddlesome “administrative state” should ring familiar, and may find a sympathetic audience among the justices, with those words featured in a recent decision that limited the Environmental Protection Agency’s powers. (Notably, Axon’s lawyer, Paul Clement, is also a familiar figure, having won a gun rights case in June that prompted his former employer, Kirkland & Ellis, to swear off Second Amendment cases. In response, Clement parted ways with the firm to form his own.)

Why bank CEOs are spooked

JPMorgan Chase’s C.E.O., Jamie Dimon, in a leaked conversation with top clients, recently put the chance of a recession at 90 percent. But the bank’s chief economist, Bruce Kasman, put that risk at most 40 percent. “I don’t think it is a likely scenario,” Kasman said.

Dimon is not the only big bank chief executive who is more bearish than the economists on his payroll. David Solomon of Goldman Sachs and James Gorman of Morgan Stanley rate recession odds as considerably higher than the top economists they employ.

What are top Wall Streeters seeing that economists might be missing? One possibility: In the run up to the financial crisis of 2008, a number of large banks logged big write-offs on housing loans long before many economists could calculate them into their models. Now some observers worry that the same thing could be playing out in the corporate loan market, which is creating losses for the banks as the Fed raises rates.

Companies have more debt than ever. Last month, S&P Global Ratings reported that over 9 percent of inferior rated companies appeared to be in distress, up from just over 4 percent the month before. 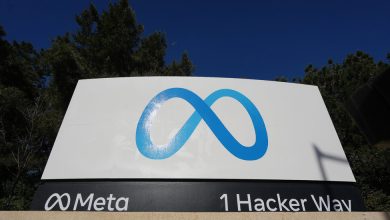 Meta’s Oversight Board Calls for Overhaul of Nude Photo Standards 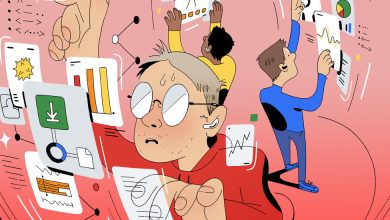 Google Calls In Help From Larry Page and Sergey Brin for A.I. Fight 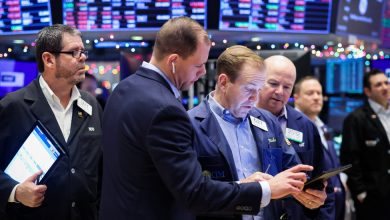 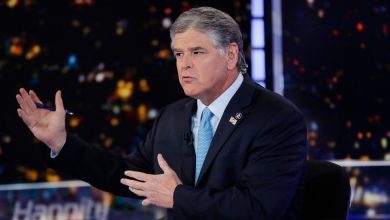 In Testimony, Hannity and Other Fox Employees Said They Doubted Trump’s Fraud Claims