Mr. Adams announced that Sheena Wright, a trusted adviser now serving as a deputy mayor, would replace Lorraine Grillo as his first deputy mayor. Camille Joseph Varlack, a lawyer and currently a senior adviser to the mayor, will be his new chief of staff, replacing Frank Carone, a close friend and powerful lawyer.

“I trust them,” Mr. Adams said of Ms. Varlack and Ms. Wright, as he announced his new appointments at City Hall, surrounded by many of the women serving in top posts in his administration. He highlighted his focus on promoting women, and said that Ms. Wright was the first Black woman to serve in the job of first deputy mayor.

“I am confident in their skills and commitment, and I look forward to shaping New York City’s future and getting stuff done with them at my side.”

The promotion for Ms. Wright, who has served as deputy mayor for strategic initiatives and led the mayor’s transition team, deepens the influence of a family of power brokers close to Mr. Adams.

Ms. Wright, a former nonprofit executive, is engaged to David C. Banks, the schools chancellor. Mr. Banks’s brother, Philip Banks III, is deputy mayor for public safety and a former chief of the Police Department who resigned while under federal investigation connected to a major corruption scheme.

Ms. Varlack has been a senior adviser to the mayor since Oct. 31 after serving as a special adviser to Mr. Banks at the Education Department, where she worked on the response to the coronavirus pandemic and on the Summer Rising summer-school program. She had several roles in the administration of former Gov. Andrew M. Cuomo, including deputy director of state operations, and she was a chair of the shuttered New York State Joint Commission on Public Ethics.

She was also a founding partner of Bradford Edwards & Varlack LLP, a Black-owned law firm that is entangled in a lawsuit filed against the State of New York by Melissa Saren, the former ethics officer and chief compliance officer at the New York State Insurance Fund.

Ms. Saren asserted that she was fired after she reported that Tanisha Edwards, the insurance fund’s general attorney at the time, improperly steered business to Ms. Varlack’s firm. Ms. Edwards is now the chief financial officer for the New York City Council; a Council spokesman declined to comment.

Ms. Wright and the Banks brothers also figured in an incident that raised ethics questions. In 2013, Ms. Wright had a dispute with her then-husband Gregg Walker that involved mutual allegations of domestic abuse and the arrest of both parties. The City, an online publication, reported that after Ms. Wright was arrested, David Banks reached out to his brother, Philip, then a high-ranking police official.

The charges against Ms. Wright were dropped, and she has said that she “never asked anyone to make any phone calls on my behalf.”

As part of the Adams administration, Ms. Wright focused on the city’s summer youth employment program and a plan to make child care more affordable. She previously served as the chief executive of United Way of New York City and worked as a lawyer.

“She knows how to bring businesses, nonprofits and government together to simply get stuff done,” Mr. Adams said.

Mr. Carone and Ms. Grillo both said that they had intended to serve through Mr. Adams’s first year in office in order to help him find his footing. They will depart at the end of the year, leaving Ms. Varlack and Ms. Wright to run the daily operations of his administration and help implement key initiatives.

Their promotions may complicate the role of another key member of Mr. Adams’s inner circle, Ingrid P. Lewis-Martin, a chief adviser. Ms. Lewis-Martin, who has worked for Mr. Adams since he was a state senator, said in a recent interview with City & State that she was “the lioness of City Hall” because she viewed it as her job to protect the mayor.

“I’m not Michelle Obama,” she told the publication. “When they go low? We drill for oil. I’ll meet you down in the subbasement.”

Mr. Adams, a Democrat, has quarreled at times with leaders in his own party and members of the City Council over his aggressive approach to crime and his push to roll back changes made to the state’s bail laws. Mr. Adams spoke to the latest violence in the city on Tuesday: an overnight search to locate a man accused of several shootings.

“He is the poster child of just a failing system of keeping dangerous people off our street,” Mr. Adams said on WABC radio on Tuesday morning.

Mr. Adams has embraced the motto of “getting stuff done,” but critics question whether he is moving quickly enough to address the city’s pressing challenges, including creating more affordable housing. A report on Tuesday by Brad Lander, the city comptroller, raised alarm about a staffing crisis in city government that he argued was affecting basic services and “putting our city at risk.” 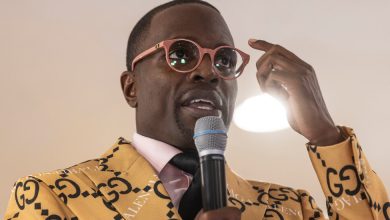 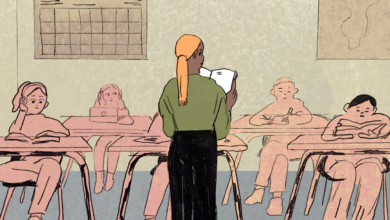 I Love My Students, but I Won’t Use a Gun to Protect Them 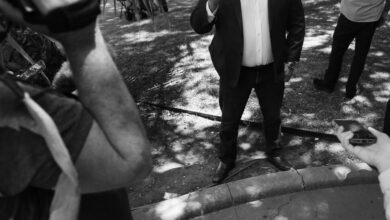 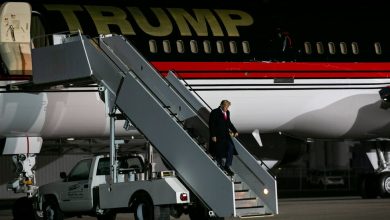 Conviction Won’t Be a Financial Death Sentence for Trump Organization