Up a steep flight of stairs in Manhattan’s Chinatown neighborhood, a hazy cloud hung over the crowd that had gathered over the weekend, at an event space accented by a cartoon mural of Fat Albert holding a gallon bag of fake weed.

It was the awards party for the New York Growers Cup, a new grass-roots competition highlighting local craft growers who have been working for years — in the shadows and now in a legal gray area — to perfect their particular strains of marijuana.

Currently, most weed sold in New York arrives through backdoor channels from California, but weed grown in the Empire State will be the centerpiece of its new recreational market: Retailers will only be allowed to sell marijuana grown in New York.

With the market here expected to become one of the country’s largest, many of the contestants at this event were hoping not only to find legitimacy as doors open, but also become the next big name in cannabis.

Kayla Lawrence, known as the Strawberry Dutchess, helped serve as a judge.Credit…Sebastian Mejias for The New York Times

On Saturday night, some people brought their own smokes or tried free samples on display. At nearly every table, someone was rolling a joint or taking a dab. (A dab is a concentrated form of cannabis that comes in a sticky wax and can also be smoked from a pipe or a bong.)

Growers in gold wristbands talked shop with potential distributors, while others danced to popular songs played by a D.J. with a large Afro and waist beads, lounged on couches or grazed at a table with mozzarella sandwiches, meatballs and a cheese board.

A man who calls himself Mr. Puffington walked around spraying vapor from a contraption he called the cloud cannon, which looked like a cross between a bong, a water gun and a plastic food storage container.

Mr. Puffington and his cloud cannon.Credit…Sebastian Mejias for The New York Times

Some people at the event gave just their first names or business monikers because for now, their activities remain unlicensed and illegal.

Like wine, cannabis has different notes that are defined by terpenes — natural compounds affecting its taste, smell and color. There are believed to be at least 150 terpenes in cannabis, but for brevity’s sake, the competition narrowed the flavors to five categories: haze, exotic and rare, fruit, gas, and “other.”

Strains from the West Coast have long dominated the market in New York. Odee, whose minty Cap Junky strand won best exotic and rare variety, lamented that New York consumers were missing out on the quality and variety grown in their own state.

“We know what we’re doing here,” he said, but people need to know that “THC isn’t everything.”

About 80 growers entered the competition, which was organized by a group of growers and a former journalist. The participants all work in the state’s long-running legacy market, which existed before legalization.

They want to get licensed, but applying for one means they’ll have to expose their activities to the government without any guarantee that they will be approved. It’s a risky transition for a group of people who derive their livelihoods from a plant that remains federally illegal.

The Kolektor, center, and several others at the event wore ski masks to obscure their identities. The Godmother, right, won the best of gas award.Credit…Sebastian Mejias for The New York Times

The Kolektor, 35, one of the event’s organizers and a former infantryman, started growing weed to wean himself off opioids prescribed for post-traumatic stress disorder. His weed is “local, clean, never sprayed and represents the culture of New York,” he said. His family also depends on the money he makes from selling it.

“If there’s no way for people like me to get into the industry, we’re not going to change our lifestyle,” he said.

“We want to see events like this happen,” he said. “It helps us when we’re writing the regulations.”

Damian Fagon, left, a state regulator, announced one of the winners.Credit…Sebastian Mejias for The New York Times

When Theresa and Brian Lawrence, of Ballston Spa, N.Y., started smoking as preteens 50 years ago, it was “hush-hush, don’t tell,” Mrs. Lawrence said.

They tried 20 entries in the exotic and rare category with their daughter, Kayla, who goes by “Strawberry Dutchess” and was a competition judge.

They enjoyed “almost every one,” Mr. Lawrence said.

When Theresa and Brian Lawrence, center, started smoking as preteens decades ago, it was “hush-hush, don’t tell,” Mrs. Lawrence said.Credit…Sebastian Mejias for The New York Times

Eleni, who goes by “the Godmother,” started growing weed in her closet when she was 15. On Saturday, at 23, she walked away as the winner for best gas — a category she called “so New York!”

The Godmother and the Kolektor hug after she won the gas category.Credit…Sebastian Mejias for The New York Times
Tags
New York State That Times Was 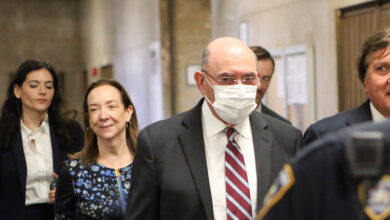 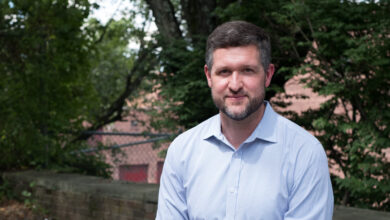 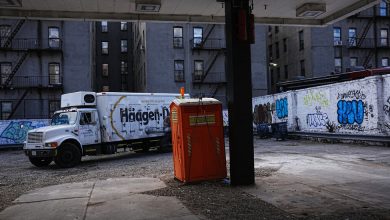 Why Harlem Is Getting a Truck Depot Instead of New Housing 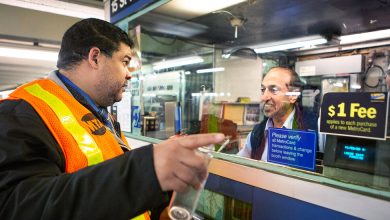 Subway Station Clerks To Step Out From Booths Into New Role